Why I am never going back to Cha Me. Cha

Excuse me while I let off some steam.

The fiancé and I decided to go to this nice little Taiwanese bubble tea place/restaurant to have dessert for dinner. They serve hot food, appetizers, bubble tea and dessert. You know the usual. Mind you I have absolute no problems with the food, it taste like how Taiwanese food should taste. We ordered just a green tea shaved ice to share, this was at 8pm. We were patiently waiting while a lot of tables around us were starting to empty out. 15 minutes later, the table across from us who came in after us had already gotten their order. I'm thinking, where is my food?

5 minutes later, I asked a waiter to check on our dessert because it's been a while. I saw him speaking with the kitchen staff but he never came back, so we just continued waiting.

It has now been 25 minutes and I was getting livid. I mean how long does it take to make shaved ice??? Turn on the damn machine and let that thing do it's job, no? I see other tables getting theirs, but where the hell is ours?

Not only was our dessert taking a million years to come out with no explanation from the previous waiter, it was so hard to call someone over! We raised our hands and tried to get their attention, but they either see us and ignore us or they just don't want to bother.

Finally we got the attention of a waitress, I told her we've been waiting for 30 minutes for one dessert. She said it's been busy and that's why it's taking a while. HELLO???!!! BUSY? Are you kidding me, the tables around us have been empty for a while and the waiters are just standing around chatting with each other! Please tell me what part of "busy" are you referring to!

I told her to check on our order and if it's not made yet, to cancel it. She went without a word, and came back 3 minutes later with our dessert.

Seriously? It takes a customer being angry and speaking out for you people to get your butts working? And I didn't even get an apology, they literally said nothing to me. We waited 30 minutes for something that can be made within 3 minutes and that is not even including the time that we had been trying to get an attention of a waiter to take our order and then ask about our order. At least an explanation or an apology would have suffice, but you just left us with our food that we couldn't even enjoy anymore.

This is the second time we came to this place, the first time we waited 30 minutes for our meal as well, but that time we ordered hot food so I didn't mind as much.

The attitude of the staff is just ridiculous, don't try to wiggle yourself out of the situation and make up excuses when confronted!

Like I said, there's nothing wrong with the restaurant or the food, but rest assured we won't be coming back ever again.

Here is the dessert we ordered, it was good, but I couldn't enjoy it. 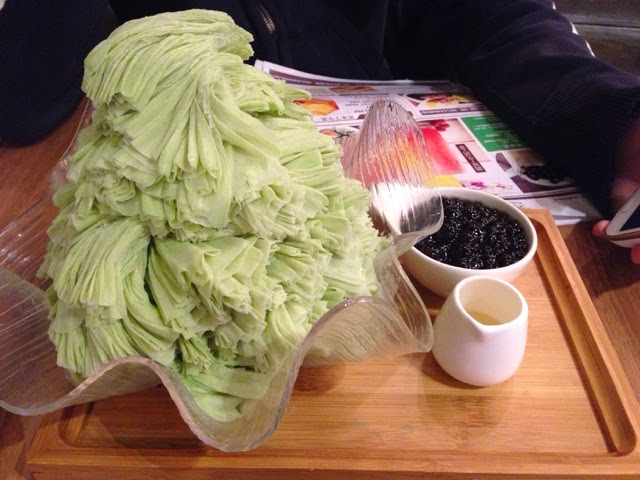 Posted by mizzsandychau at 9:23 PM